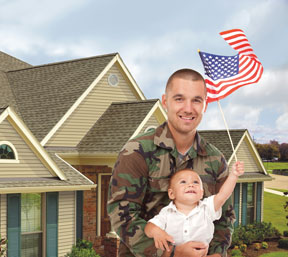 (NewsUSA) – It’s a good thing no one joins the armed forces to get rich because it turns out a higher percentage of military families are in debt than civilians.And that has one New Jersey company ticked off enough to do something about it.According to a report by the Financial Industry Regulation Authority’s Investor Education Foundation, 27 percent of military families surveyed admitted having more than ,000 in credit card debt, compared to 16 percent of civilian adults. And while the foundation noted that "navigating the complexities of today’s economy can be challenging" for anyone, it singled out one issue — frequent moves and deployments — that "further complicate" military families’ finances.Think about it: Every move from, say, Fort Hood, Texas, to Fort Bragg, North Carolina, means once again having to decide whether to buy a new house, rent or live on base.And so, to help ease their burden, GAF, the largest roofing manufacturer in North America, is offering 0 rebates throughout 2012 to all active military, veterans and retirees who buy a GAF Lifetime Roofing System and have it installed by one of their factory-certified contractors — with the contractor in many cases kicking in another 0. (The full details can be found at www.gaf.com/military or www.military.com/discounts.)"We’re honored to be able to give back to the brave men and women who’ve risked their lives to keep our country safe," says Paul Bromfield, a senior vice president at the company.How else are military families hurting financially?* More than one-third of respondents reported having trouble covering monthly expenses and bills.* About 10 percent of mortgage borrowers admitted having been late on a payment at least once in the two years prior to the survey, and 3 percent said they’d been involved in a foreclosure process over that same period.* Household expenses exceeded the income of one in seven respondents.* Only 39 percent of enlisted personnel and junior non-commissioned officers said they’d set aside enough emergency cash to sustain them for three months, with the number higher for senior NCOs (46 percent) and officers (67 percent).Enraged yet? Well, at least Congress did take steps to cap the interest rate that so-called "predatory lenders" can charge active-duty service members and their families for things like payday loans — though 36 percent isn’t exactly what you’d call low — which enlisted personnel and junior NCOs turn to significantly more often than civilians.